"We're not just a band, we're a musical community." 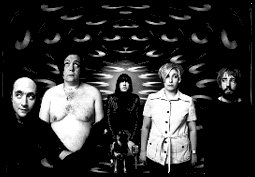 Ultrasound are: (left to right)


In 1989 Tiny a 'mature student' studying Popular and Commercial Music at Wakefield College, befriended his coursemate, the then 16 year old classically trained cello player (!) Richard Green. Richard also met Andy Peace (a body-building motorcycle obsessive),  on the same course, and Ultrasound's first elements emerged. They all qualified for a music degree in Newcastle, where they met Vanessa Best, also on the same course as them. They formed bands, more bands and even some imaginary bands. Tiny, Richard and Andy then joined the band 'Sleepy People' whose main songwriter, Paul Hope was the ex-guitarist in one of Tiny's previous bands, Step TLV. The lack of mainstream success began to wear on Tiny and Richard, so they decided a change might be a good idea. A move to the capital then ensued, without Hope, (unjustifiably) where Tiny and Richard, on bass at that time formed 'Popacatapetal' (named after a Mexican volcano.) Success did not beckon, due to what Tiny calls a conflict of interests, or in other words (rather ironically)"Popacatapetal had a bit too much prog-rock about it." They decided to try again. Calling in Vanessa, who had moved to London and was singing backup in a George Michael(?!) tribute band, to play bass, and with Richard switching to lead guitar, Andy joining on drums, and roping in Matt, Tiny's neighbour and professional acid disposal unit, on keyboard, Ultrasound's current lineup was eventually settled. And thankfully the name was changed too. For more information about Ultrasound's pre-Ultrasound days, go to the Organ's site and look under Org Bands.

The band's lowest point came just before a gig in Oxford in around 1996. A split was becoming a definite prospect, but fortunately the gig was so well-received it was a source of re-invigoration to the band. After some London gigs, and some lucky breaks, Ultrasound finally begun getting noticed by the mainstream media, and were part of the NME's Unsigned Showcase in 1997. After sending demos to several record companies, Ultrasound released their first single, on Simon William's Fierce Panda label, the past set opener Same Band. Same Band received airplay on Radio 1's Evening Session and Lunchtime Social, and a certain degree of critical acclaim "'Same Band' sounds like The Who's 'Tommy' - in its entirety - squeezed into four-and-a-half minutes; is utterly heroic and bizarrely, by some distance, their most understated moment." as the NME put it. The band were also a part of Radio One's Oxford Sound City in 1997. Eventually signing to Nude Records, because they trusted the look in Nude's boss' eyes, the band released second single Best Wishes on the 23rd February 1998, as a limited edition CD with only 5000 numbered copies available. The 10" release was even scarcer, with only 1000 copies available. This also received good reviews, and was selected by Radio One's Mark Radcliffe as single of the week. Touring with Travis and Embrace ensued, getting them more much needed exposure. The band made their debut TV appearance on BBC 2's 'Later With Jools Holland', performing third single Stay Young and Same Band b-side and live favourite Floodlit World.The epic Stay Young, an NME single of the week, received substantial airplay, and was released on the 1st of June on CD1/2 and 7" It was Ultrasound's highest chart entry to date, reaching an impressive no. 30, and was produced by Nigel Godrich, who also produced OK Computer. Ultrasound played several festivals in 1998, impressive considering that 18 months before they were playing to a handful of people in Camden. Appearing on the second stage at Glastonbury during a torrential downpour, an epic performance ensued, earning rapturous reviews from the music press. The band also appeared at T In The Park on the NME stage, and also made an appearance on the Melody Maker stage at Reading. Their next  single was about 'a relationship gone very sour indeed' and was called 'I'll Show You Mine' released October 12th. A tour in support of Placebo followed in October, garnering mixed responses from Placebo fans (to say the least.) Releasing fifth single, Floodlit World, a re-recorded version of the Same Band b-side, on the 29th March, they garnered a No. 39 chart position and a Melody Maker Single of the Week. Their double-CD debut album, Everything Picture, was released on the 19th April, to a lukewarm critical response, but an impressive no. 23 placing in the album charts. The tour accompanying the single/album release, however, gained them a larger following, boding well for the future. A somewhat incongrous appearance as part of London Fashion week saw an absolutely stunning Tiny flashing his stomach, daubed with Unique as part of the Red Or Dead display (making the front page of the Independent) and also saw Matt and Andy flashing everything, after streaking the catwalk naked (live on TV, incidentally.) After a suitably wondrous Glastonbury appearance, and amid rumours of a split, Ultrasound retreated into the studio after a full 6 months of touring, to begin sessions for the as yet untitled second album. Next single Aire & Calder caused some tension between Ultrasound and Nude due to the record companies un-approved truncation of the track, but should be released in late August, featuring new tracks Valencia and Goodbye 25, first aired at Glastonbury. Whatever ensues, it should be interesting.
More info to be found in the news section. Surprisingly enough.